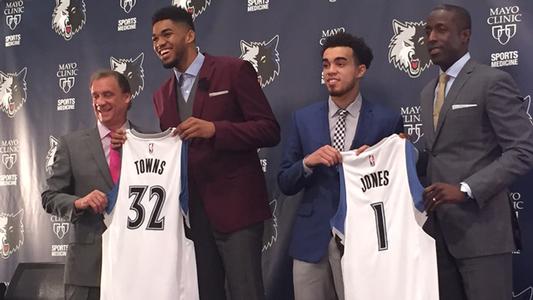 Now that Towns is one of us, it’s time he take a tour of our wonderful city.  I would like to be the man to do that.  Here are the places I would take him.  (We also drafted the super talented Tyus Jones at #24, but that dude is from here.  He already knows where the Electric Fetus is.)

The Cherry Spoon thingy – Most people don’t know what the cherry spoon is all about.  Some people joke that it belongs to a very greedy heroin addict.  Some say it’s encouraging people to eat humongous fruit.  But it’s actually an analogy for the Minnesota Timberwolves.  The cherry is the team.  The giant spoon is Karl-Anthony Towns.  The moat is the last 11 years.  CARRY THE CHERRY, Mr. Towns.  Carry the motherfucking Cherry.  We’ve sucked so bad for so long that this actually makes sense to me.  #carrythecherry.

The Fancy Ray McCloney wall mural on Lake Street – Not only is it important to show Karl-Anthony Towns what Minnesota expects from him, but to show him what he can expect from Minnesota.  And that is total devotion.  If he promises to love us, we promise to love him.  That means he can expect to be about as famous as this mural of Fancy Ray McCloney.  It IS Minnesota, after all.  Now that may not sound like much on the surface, but everybody loves Fancy here.  He’s like Prince, if he were weirder but more likely to be spotted at an Arby’s in St. Louis Park.  I once saw him running around the track at the YMCA in a red leotard with curlers in his hair at like 1pm.  Let’s start there.  If Towns does good maybe he can reach Al Franken levels of superstardom.

The Minnesota Institute of Arts – This place is a really great museum.  So many cool artifacts and sculptures from every imaginable place in the world.  I would take Towns here to show him that we have a real appreciation for life and art in Minneapolis.  And then, by the South American boat section, I would lean in to his ear and say “If you ever leave us like the others, I’ll fucking hollow you out like this boat and ride your carcass to Lima.”  And then he’d say “What?” And I’d say “Nothing. You’re really good at free throws.”

Well, barring any trades, that’s pretty much it for the summer.  I’ll pop in if something big happens, but until then GO WOLVES!  SUCK IT, OKAFOR!  ENJOY BEING THE 76th Center in PHILADELPHIA!