I’m not an analytics guy.  I don’t understand math and I don’t give a crap what PER is, because it makes my head hurt and it feels like reading Latin backwards.  I watch the NBA to be entertained, not figure out if Zach LaVine would get to St. Cloud faster on a train heading west at 75mph from ten miles away versus Gorgui Dieng two feet away on roller skates.

I’m an emotional NBA fan.  I judge players like my mother judges me: On a day-by-day basis depending on how “neat” they are.  Steph Curry could have a five point, 1-12 night and I’d be ready to consider him the next Kwame Brown.  In other words, I’m an idiot.  So here’s this idiot’s emotional, irrational list of the best rookies in the NBA so far.

This one’s in the bag.  KAT is a beast and once his minutes get past the length of a Daily Show clip he’s going to lead the rookies in most categories.  My favorite things about KAT include his intensity and the fact that at 20 years old he has an imaginary friend.  I’m 37 and go on ghost hunts so any time a successful person is crazy it makes me feel like I’ve got a shot.

I still can’t pronounce his name so I just call him “Portishead”.  A lot of people think Portishead looks like Dolph Lundgren in “Rocky IV” but I see him in more of a Dolph Lundren in “Kindergarten Cop 2” light.  I didn’t know it existed until recently but sign me the fuck up.

Larry is not a super great rookie, but for some reason I find it hilarious that Larry Nance has a son in the NBA.  Other sons of former NBA stars I’d like to see in the league include Spud Webb Jr., Andrew Bynum Jr., George Mikan Jr. (he’s 65) and Shawn Kemp IX. 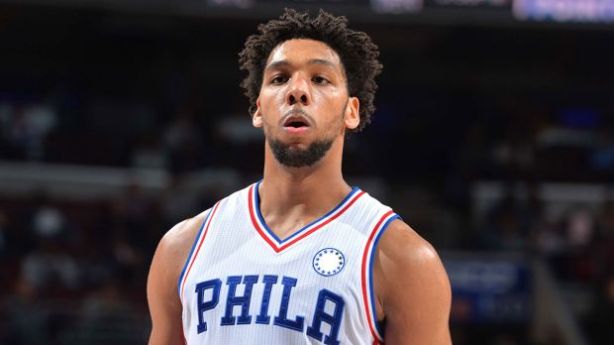 Okafor got into a street fight last week and unfortunately it’s the most exciting thing the 76ers have been associated with in years.  Was Okafor a dick before Philadelphia or is there just something about the City of Brotherly Love that turns people into raging psychopaths?  Turns out the fight started when someone came up to Okafor and his teammates and started talkin’ about PRACTICE.

I would pay $10,000 to have Justice Winslow’s name.  It sounds like an old-timey street-vigilante’s moniker.  “Hey mac, drop the diamonds.  Justice Winslow is coming!”  BIFF PAFF BLOP!  When he’s not busy being a promising NBA rookie, Justice Winslow shoots judge gavels from his fingertips fighting his notorious gangster arch-enemies Mugsy Bogues, Tiny Archibald and Vinny “The Microwave” Johnson.

Next up the Timberwolves play the Clippers in Los Angeles.  DeAndre Jordan has said he’ll be there, which means he won’t be playing.