I realize this is a few days late, but I live in Minneapolis.  Prince died and everything officially shut down while a giant chunk of downtown became a three-day dance party.  We lost our purple president.  It’s like if 69 Kevin Garnetts died.

However, I’ve had a moment to regroup and it’s time to re-commence my excitement: 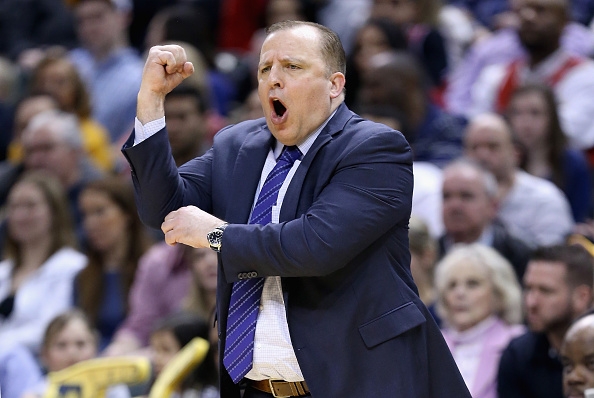 Yes, there are concerns about his overplaying players, driving them into the ground and therefore causing unneeded injuries.  That may or may not be true, but it’s a small concern.  If you’ve been driving a Ford Focus for 15 years, you don’t complain because your new Ferrari doesn’t have a cup-holder.

Many people are wondering how our young team is going to fit in with this hard-nosed workhorse.  Will they fall apart under the pressure or flourish with the new discipline? Here’s how I predict it will go with each player individually:

Karl-Anthony Towns – KAT is going to be a 25ppg/12 rpg player next year.  Thibs’ intensity will only make him work harder and he’ll become a top ten player on his way to eventually becoming the greatest big man in NBA history.  Basketball will be renamed “KATball” and every player will be required to have an imaginary friend.  He’ll be elected ruler of the new world when we colonize Mars and will rule over 1000 years of peace.  I’m freaking out!  I LOVE KAT!!!

Andrew Wiggins – This will go either one of two ways.  Either his nice-guy Canadian DNA will cause him to wither in the face of a screamy, meany-face coach or it’ll unlock his inner mutant like Deadpool. I’m hoping for the latter. In fact, Wiggins won’t fully arrive until he becomes so enraged that he rips Thibs’ throat out like a vampire and sets the Cannuck flag on fire, screaming “I denounce everything Canadian and hereby proclaim my home as HELL!”

Ricky Rubio – It’s really hard to imagine our little Care Bear Ricky with tough-guy Thibs.  It’s also hard to imagine his knees holding up under the work.  The good news is, Ricky could never jump before, so he can blow his knees out 250 times and still have the same speed/vertical.  I think Thibs is going to execute 45 shooting coaches to make this work.

Zach LaVine – LaVine is the only one out of this group that I think will be unfazed by all the ferocity.  LaVine is just too chill and oblivious.  I’m pretty sure Thibs could strangle LaVine’s hamster in front of him and he’d still be wondering if he set his DVR to record “Empire”.

Kevin Garnett – Thibs is Garnett.  Garnett is Thibs.  They are a match made in heaven.  If these two men were mob bosses and I got caught ratting on them, I’d hang myself so I wouldn’t have to get skinned alive, rolled in honey, thrown to a genetically modified killer bear, then beaten to death with a folding chair on fire.

Shabazz Muhammad – Guess who’s not going to be sneaking girls into hotel rooms when he’s not supposed to anymore?

Gorgui Dieng – Dieng runs like a choo-choo train. Look at him next time he plays.  He doesn’t move up or down when he runs and his arms hang low like they’re on the tracks.  This has nothing to do with Tom Thibodeau but I’ve been wanting to say that for a while.

Adreian Payne – Adreian has a lot of talent.  Maybe Thibs can unlock that and scare away some of those stupid extra vowels in the process?

Tyus Jones – Probably the only player who, if Thibs makes him sad, can run back to their mother in Burnsville.  Nothing a Karmelkorn Treat Center stop at the Burnsville Mall can’t fix.

Tayshaun Prince – Thibs and Tayshaun will spend most of the year reminiscing about graduating high school together.

Damjan Rudez – Rudez also looks forward to being introduced to the team.

Greg Smith – 10 day contract guys are like handjobs.  Are they really worth counting?

Next up for us is a lottery pick and free-agency.  Let’s sign all of them!