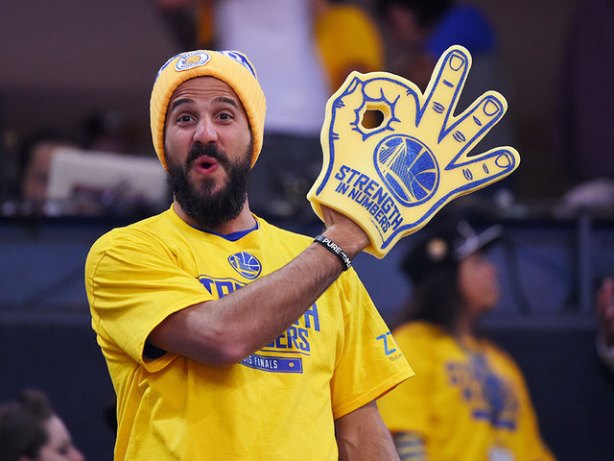 Warriors fans outside of California are like Canadians who tip.  They don’t exist.  These fake posers didn’t even know who the Warriors were until Dell Curry’s and Mychal Thompson’s sons showed up.  Wherever I go now I see every damn person wearing Golden State gear as if that beanie weren’t a Lakers one five years ago, a Heat one three years ago, a Cavs one two years ago.  Hey jerky, I got a safe team for you to sport:  Check out the Harlem Globetrotters.  They never lose!

You don’t join the team that beat you.  Michael Jordan didn’t join the Pistons in 1989.  I didn’t join the people who depantsed me everyday in 3rd grade, pulling down my own pants trying to get approval just because I wanted to be on “the winning team”.  No.  I suffered alone and then carried all my baggage into my 30s, because that’s what adults do!

Seriously, you’re gonna act like this is “your team”?  Name one player that played for that sorry-sack team after Run TMC and before Babyface McGrossmouthguardchew.  And if you don’t know who Run TMC is  I swear I will find you and slap the Hatchimal out of your hands because you are 12 and I am threatened by youth!

When did this whole “I just have a favorite player” thing start?  What a gutless way to always be winning.  I’m a Timberwolves fan until I die (or Glen Taylor accidentally sells them to another state for more Cosby sweaters). Being a Timberwolves fan is grueling, confusing and disheartening.  We are the most excited we’ve been in 13 years and we’re 11 games under .500.  Jared from Subway is going to get out of prison before we make the playoffs.  But damnit, this is our TEAM.  We don’t jump ship.  We support our team and hang tight until that special moment when we’re 95 on our deathbeds and all the marine life in the world has died and the air looks like the sky from “The Matrix” and Vince Carter is finally retiring and we say “Did the Timberwolves make the playoffs yet?  No?  Okay good, I don’t like change” and then we die.