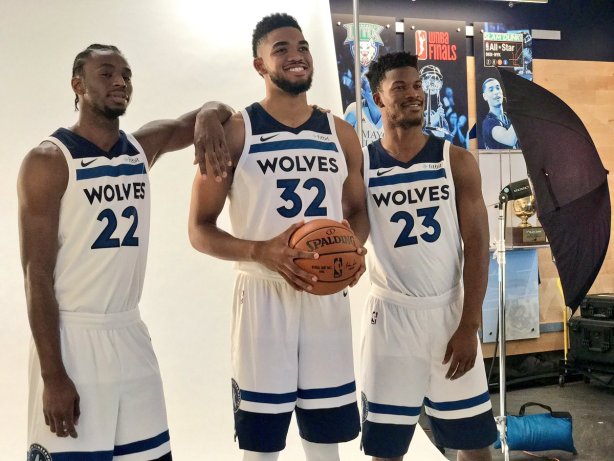 I literally say this every year, but WE ARE GOING TO BE AWESOME THIS YEAR!  Every time I’ve said that in the past has been a bullshit lie and I knew it.  I mean, yes, I believed it at the time.  Yet, deep down I knew we would never win with Alexey Shved at anything other than a “Saddest Russian” contest?  Every year leading up to this I’ve just been trying to justify spending large portions of my adult life staking my happiness on 12 random men who aren’t even really from Minnesota mostly (‘sup, Tyus).

But this year is different.  This year, we might actually play an NBA game in May.  Has there been a Timberwolves game played in warm weather since Kanye West’s first album?  Dude’s like 40 now.  90% of the league doesn’t even know we can grow deciduous trees.  Anyway, we had a SUPER busy off-season and I will now grade each major move we made one by one, because I am a super qualified judge of basketball:

Minnesota trades Zach LaVine, Kris Dunn and the #7 pick to the Chicago Bulls for Jimmy Butler and the #16 pick.

Zach LaVine is a slam-dunk champion who just wrecked his ACL.  That’s like a masseuse whose arms fell off.  Nobody wants a hook massage.  Kris Dunn is horrible.  Every single YouTube clip of him “breaking ankles” ends before the shot nears the rim because he shot like 2.5% from the field.  I think Kris Dunn is actually a Lacrosse player who accidentally walked into the NBA draft and they picked him anyway.  And the #7 pick ended up being some Finnish dude who I know next to nothing about but the Bulls chose him, so he surely sucks.  We fleeced these bitches!

Minnesota trades Ricky Rubio to the Utah Jazz for a 2018 1st round pick.

I made up a grade lower than F because I’m so upset.   I had to take my signed, framed Ricky Rubio photo out of my office and put it in the basement earlier this summer. I knew he was going to get traded and I had to start mentally distancing myself.  I’ll never change this face, Ricky!  I would have “Thelma & Louise”ed right off this cliff with you!

Listen, anything that gets rid of Adreian Payne is an A+.  Drop Payne, Jimmy Butler and move the team to Belarus?  A+!  Not only does he look 45 at 25 somehow, but his ridiculously spelled first name has way too many vowels in it.  It’s like his mom was playing Scrabble when he was born and the doctor knocked the board over and she just went with it.  Oh, and he sucks.

I like Taj.  Yeah, he’s kind of past his prime and a little expensive, but so is HBO and that shit is good for at least three months out of the year.

I will not acknowledge Jeff Teague as a human being until he apologies for breathing the air that Ricky would be breathing if he were here.

Fuck it, why not? He’s super old and kind of like clicking on the “I’m Feeling Lucky” button on Google.  What’s the worst that can happen?  (Do NOT say Brandon Roy, Kevin Garnett 2.0 or Sam Cassell after the big nuts dance tore his hamstring.)

Minnesota signs Shabazz Muhammad for peanuts after he turned down a $44 million contract with us earlier in the summer.

One time I got addicted to Ebay and bought an Ullr (the Nordic god of skiing and archery) pendant for $250 after getting into a bidding war with what in retrospect was surely someone in cahoots with the owner.  A year later I sold it on Ebay for $5.  This is how Shabazz must feel.

Minnesota signs Albert Brooks for an undisclosed amount of money.  (It’s actually Aaron Brooks, but I accidentally typed Albert Brooks and I loved him in “Finding Dory” so I’m keeping it.)

A+ for Albert Brooks, C for Aaron Brooks.

It’s a little high, but I love Wiggins and the good news is this is in Canadian money.  The exchange on this is actually $3 million USD and two Tragically Hip CDs.

I like them.  They kind of look like a gas station, but one that sells Pepsi Max.  Like…a GOOD gas station.  You can definitely get a fruit cup and poop in the toilet without getting hepatitis.

Our first preseason game of the year is on September 30 against the Lakers in Los Angeles.  Let’s see if Lonzo’s newest $500 shoes can make it through the exhibition season.